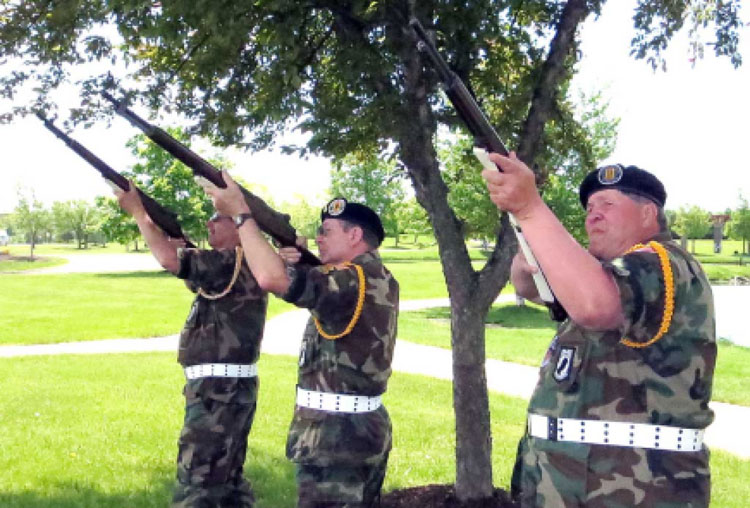 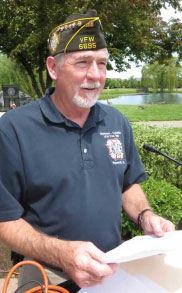 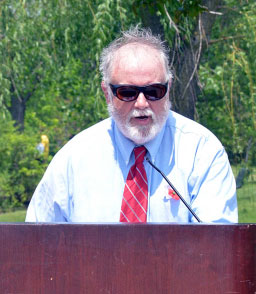 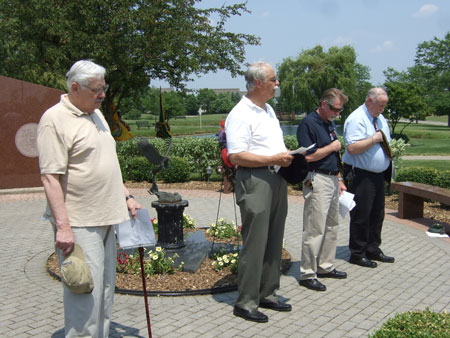 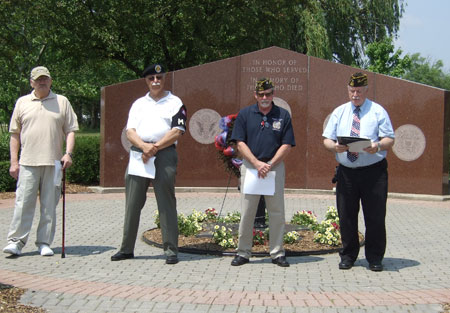 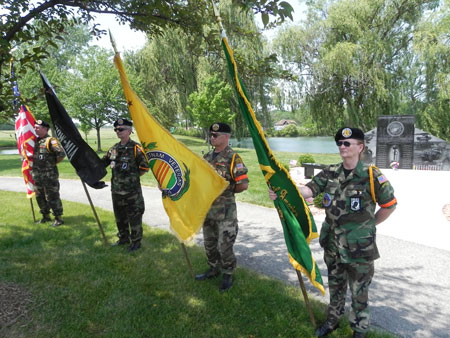 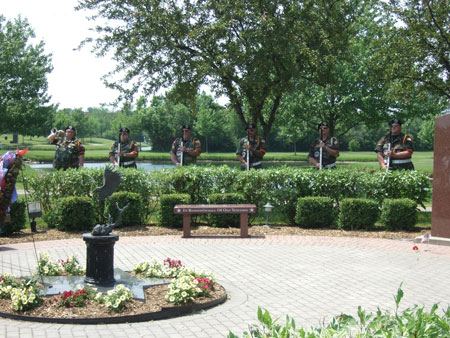 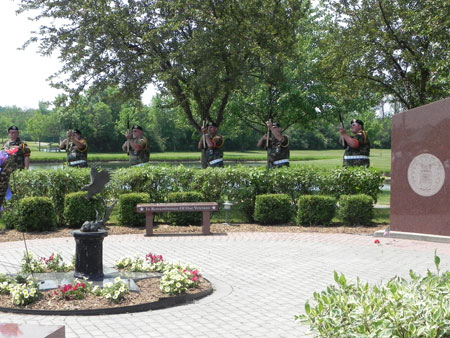 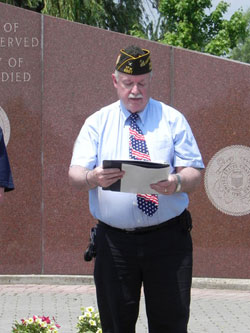 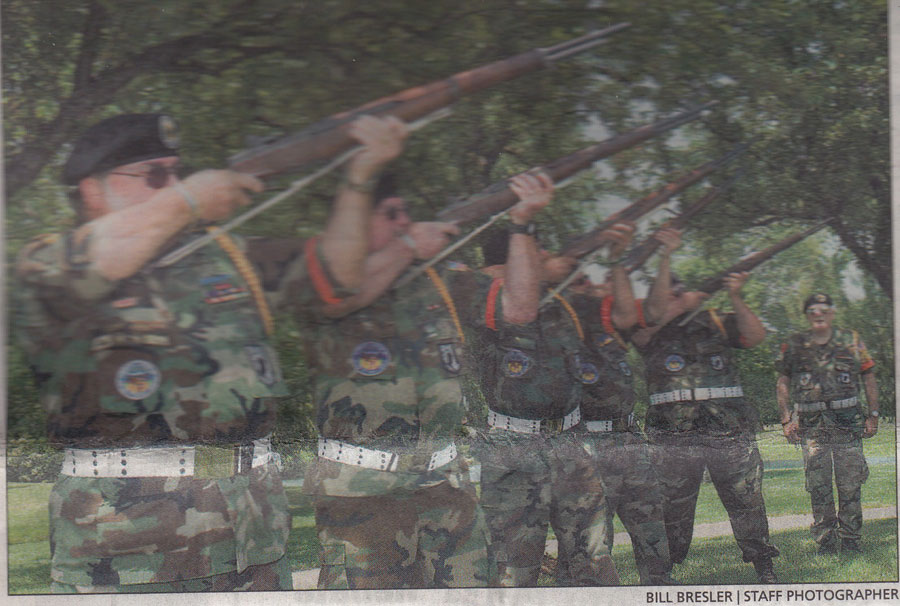 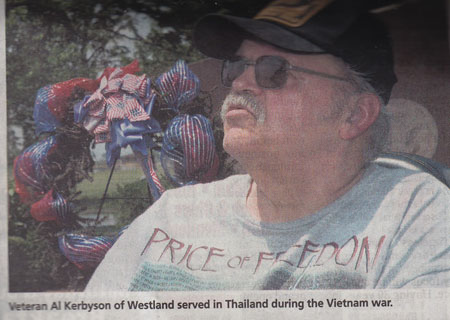 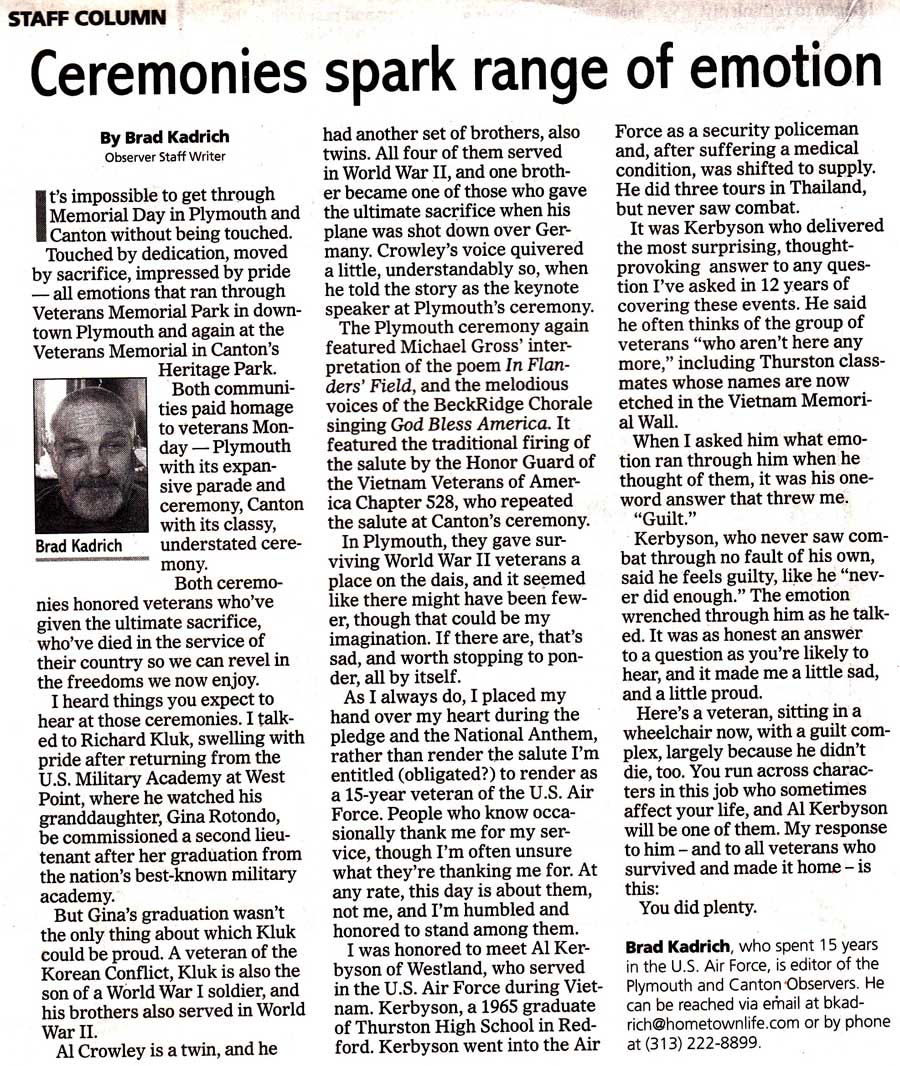 The above photos by Gary "The Bear" Kubik

Chapter 528 has been actively involve with the Memorial Day Parade and Ceremony in Plymouth, Michigan for many years. Our honored Color Guard is one of the mainstays of this yearly program. The Plymouth Community takes pride in having this event.

There were at least 150 people in attendance this year primarily due to the publicity about placing the engraved brick paver in the Memorial for USMC Corporal Jacob H. Turbett who was KIA Feb 13th in Afghanistan. Corporal. Turbett's wife, mother and sister placed the engraved brick paver in the Memorial in front of the USMC emblem followed by a moment of silence to honor Corporal Turbett. The program included reading a Memorial Day Prayer by Larry Frayer, a military service veteran, the poem In Flanders Fields by Canton Trustee John Anthony USMC Retired, and Freedom Isn't Free by Mike O'Malley from the American Legion in Plymouth, the Honor Volley and Taps by VVA 528 Color Guard. With a storm approaching, we marched through the program in 20 minutes. The Canton Observer and WDIV covered the event. Read Hometown Life Newspaper article.

"Memorial Day is a day of Remembrance of those who have died in our Nation's service. Originally called Decoration Day, a day on which flags and flowers were placed on the graves of soldiers who died in the American Civil War, it has become a day on which the dead of all wars, and all other deceased family and friends are remembered. More than just a three-day weekend marking the beginning of summer, Memorial Day is meant for us to reflect on honoring America's fallen heroes and being thankful to them for their endeavors and their profound patriotism. Memorial Day seeks to stir the patriotic feelings for every American citizen and remind us that we owe our freedom and liberty to these fine young men and women who have lain down their lives for us. Paying tribute can be done in many ways: pausing for a few moments of personal silence, attending Memorial services, placing flags on gravesites, participating in parades, sponsoring patriotic activities, visiting memorials and wearing Buddy Poppies. Today America is commemorating those who made the greatest sacrifice possible � giving one's own life on behalf of others. They came from all walks of life and all regions of our Country. They all had one thing in common � love and loyalty to our Country. This connection cemented ties between them in times of trials, allowing diverse Americans achieve monumental ends. With American military servicemen and service women currently involved in two wars and other conflicts around the world, the relevance of Memorial Day should be clearly evident. This much is owed to the more than 5,490 Americans who have died in Iraq and Afghanistan. Today, we will honor a young man who grew up in Canton, served in the United States Marine Corp and died in Afghanistan in February. We will place a brick paver engraved with his name in the Veterans Memorial honor roll."

Jacob Turbett's mother, sister and wife placing engraver brick paver in front of the USMC emblem at the Memorial

The History of Taps

Reportedly,it all began in 1862 during the Civil War, when Union Army Captain Robert Ellicombe was with his men near Harrison's Landing in Virginia. The Confederate Army was on the other side of the narrow strip of land. During the night, Captain Ellicombe heard the moans of a soldier who lay severely wounded on the field. Not knowing if it was a Union or Confederate soldier, the Captain decided to risk his life and bring the stricken man back for medical attention. Crawling on his stomach through the gunfire, the Captain reached the stricken soldier and began pulling him toward his encampment. When the Captain finally reached his own lines, he discovered it was actually a Confederate soldier, but the soldier was dead. The Captain lit a lantern and suddenly caught his breath and went numb with shock. In the dim light, he saw the face of the soldier. It was his own son. The boy had been studying music in the South when the war broke out. Without telling his father, the boy enlisted in the Confederate Army. The following morning, heartbroken, the father asked permission of his superiors to give his son a full military burial, despite his enemy status. His request was only partially granted. The Captain had asked if he could have a group of Army band members play a funeral dirge for his son at the funeral. The request was turned down since the soldier was a Confederate. But, out of respect for the father, they did say they could give him only one musician.

The Captain chose a bugler. He asked the bugler to play a series of musical notes he had found on a piece of paper in the pocket of the dead youth's uniform. This wish was granted. The haunting melody, we now know as 'Taps' used at military funerals was born. The words are: "Day is done. Gone the sun. From the lakes. From the hills. From the sky. All is well. Safely rest. God is nigh.
Fading light. Dims the sight. And a star. Gems the sky. Gleaming bright. From afar. Drawing nigh. Falls the night.
Thanks and praise. For our days. Neath the sun Neath the stars. Neath the sky. As we go. This we know. God is nigh.