"I was a Counterintelligence Agent and served primarily with the 101st Airborne, 2nd Brigade, LZ Sally. To be sure, I did serve with other units in Vietnam, however, usually the 101st. For your knowledge depending on assignment I could be anywhere in I Corp on any given day. I worked with the CIA (Air America), Phu Bai and other intelligence units.

Hopefully this is not to confusing. As an agent I could be working on base security, security clearances, sabotage, espionage or maybe a subject interview. State side I was involved in undercover work during the campus riots of early 1970 in addition to my other assignments listed above.

Now you can understand why it took me many years to join the VVA. I never felt I belonged with the people that served that were shot at or worse. To be sure, I was shot at more than once in so called non-combat areas. I was trained and fluent in the Vietnamese language."

This portion is only in the beginning stages. Hopefully, with the help of our "Original Members" I will be able to come up with a historical chronology of our Chapter.

Don Dignan first meeting was in May 1990 at the Canton library. He remembers the following members being around: Dan Stengle, Greg Huddas, Joe Agius, Bob Cohen, George Klepack, and Mike Schlott.

In January 1978, a small group of Vietnam veteran activists came to Washington, D.C., searching for allies to support the creation of an advocacy organization devoted exclusively to the needs of Vietnam veterans. VVA, initially known as the Council of Vietnam Veterans, began its work. By the summer of 1979, the Council of Vietnam Veterans had transformed into Vietnam Veterans of America, a veterans service organization made up of, and devoted to, Vietnam veterans. Membership grew steadily, and for the first time, VVA secured significant contributions. The combination of the public's willingness to talk about the Vietnam War and the basic issues that it raised, as well as the veterans themselves coming forward, was augmented by the nation's dedication of the Vietnam Veterans Memorial in November 1982. The week-long activities rekindled a sense of brotherhood among the veterans and a feeling that they shared an experience that was too significant to ignore. In 1983, VVA took a significant step by founding Vietnam Veterans of America Legal Services (VVALS) to provide assistance to veterans seeking benefits and services from the government. By working under the theory that a veteran representative should be an advocate for the veteran rather than simply a facilitator, VVALS quickly established itself as the most competent and aggressive legal-assistance program available to veterans. VVALS published the most comprehensive manual ever developed for veteran service representatives, and in 1985, VVALS wrote the widely acclaimed Viet Vet Survival Guide—over 150,000 copies of which are now in print. The next several years saw VVA grow in size, stature, and prestige. VVA's professional membership services, veterans service, and advocacy work gained the respect of Congress and the veterans community. In 1986, VVA's exemplary work was formally acknowledged by the granting of a congressional charter. Today, Vietnam Veterans of America has a national membership of approximately 50,000, with 630 chapters throughout the United States, Puerto Rico, the Virgin Islands, and Guam. VVA state councils coordinate the activities of local chapters. VVA places great emphasis on coordinating its national activities and programs with the work of its local chapters and state councils and is organized to ensure that victories gained at the national level are implemented locally.

The Retired Enlisted Association (TREA) is providing the Military Reunion Listings as a FREE service to the veteran community. They search the internet looking for reunions and then send requests for the information to the listed POC.   Please take a look at their web site TREA. Scroll down the left side and click on Reunions/Buddies, and this will bring up the reunion page.   As reunions are completed, they are transferred to the Completed Listing at the end of the month.   There, they will remain as a reference point for someone looking for a unit contact. The intention is that each calendar year reunions will be individually listed. 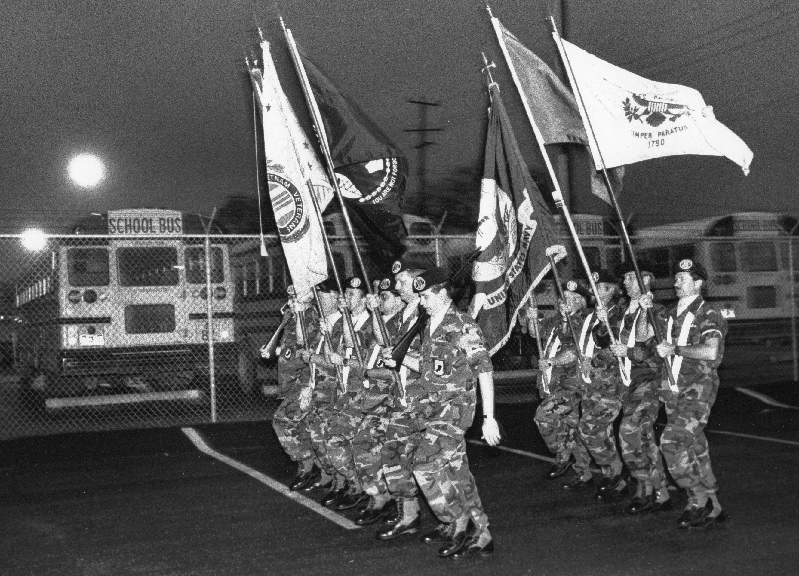 The above photos are from George Klepack our first Treasurer. George now lives in Indiana. The pictures of the Color Guard and are from the early 90's as I see Glenn Heinrich was our drill sergeant. - Joe Agius

Our original Articles of Incorporation - September 19, 1982

Vietnam and Iraq Veterans discuss their wars
Congress To Blame For Fall of Vietnam
Last WWI combat veteran laid to rest/font>
Reflections on returning to Vietnam
POW Benefits Act introduced
25th Anniversary of The Vietnam Memorial Needs to be downloaded (web archive).
Free Vietnam War Memorial Wall Card
Signs of a Stroke All members should know the signs of a stroke.   Thanks, Gary!