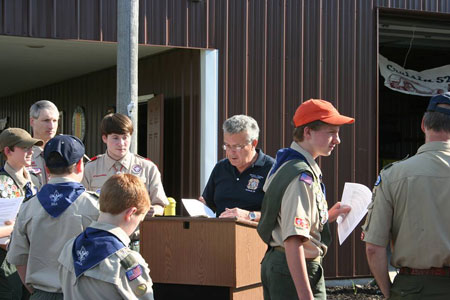 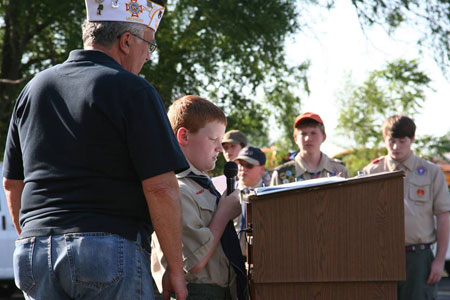 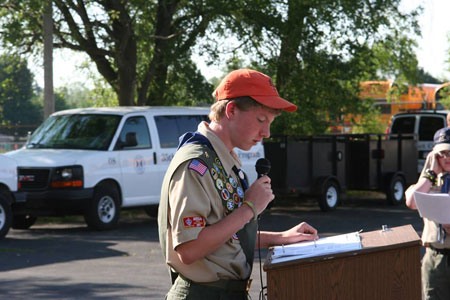 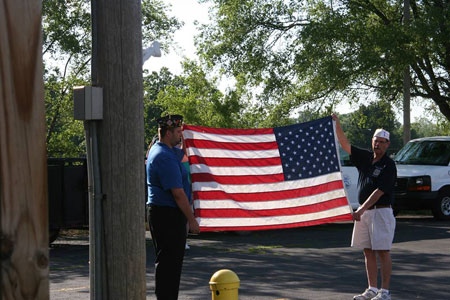 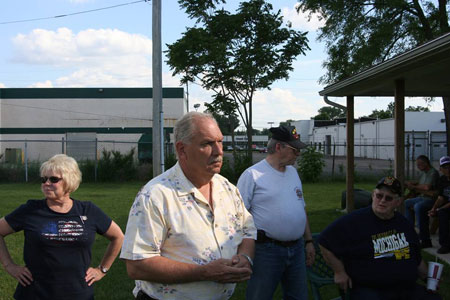 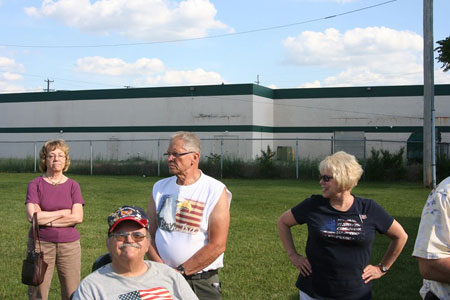 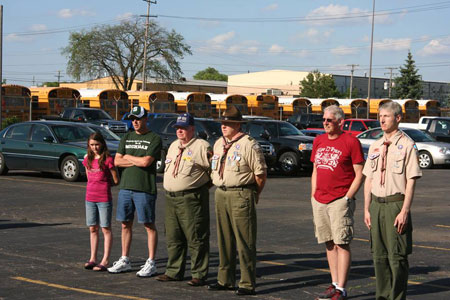 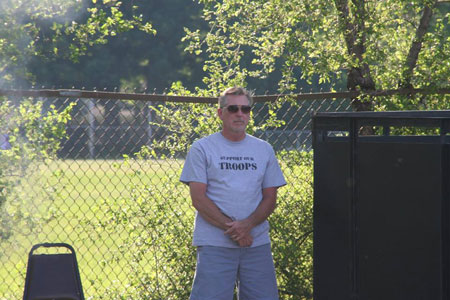 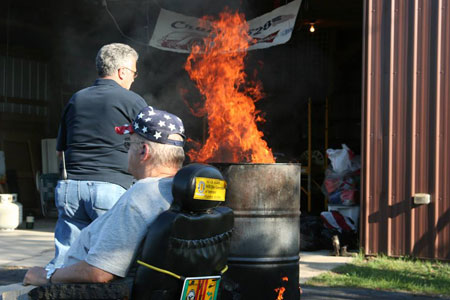 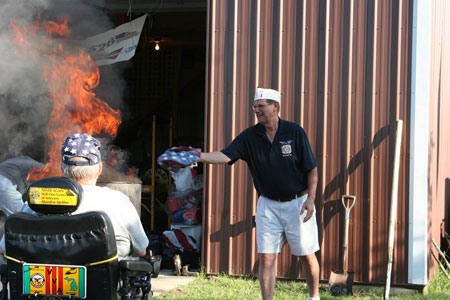 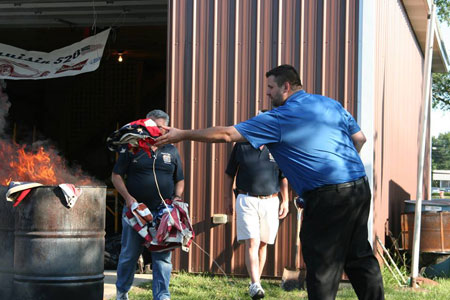 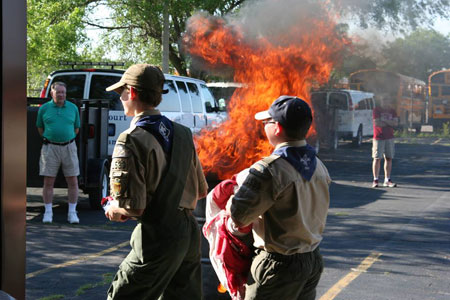 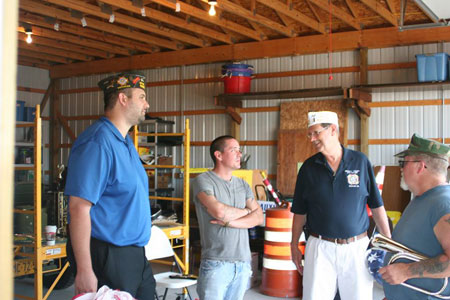 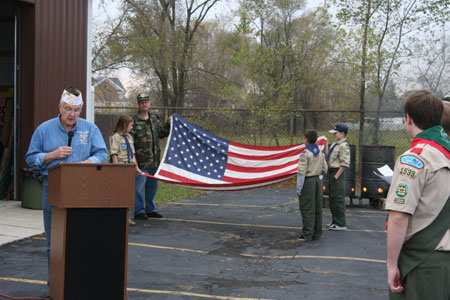 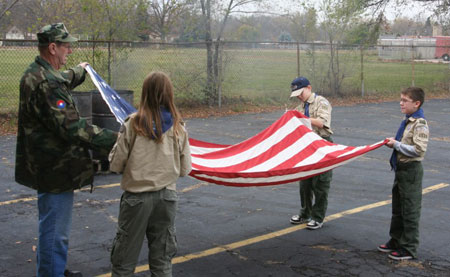 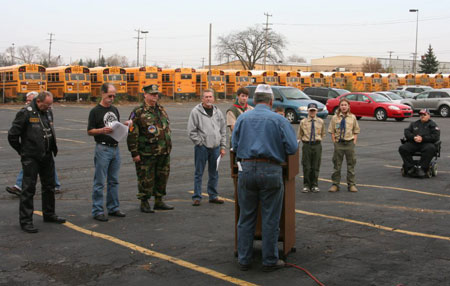 American Flag Exchange Program: This program has been very successful for more than two years. We replace old, tattered flags throughout the community with new ones. Each year we have a ceremonial flag burning event with community Boy Scout troops to dispose of the old flags properly.

The Flag Exchange was a big success. All of the flags from our original purchase are now gone. The chapter approved the continuation of the exchange program and we are now exchanging flags from our fourth batch of flags from CVS Flags. For those individuals interested in displaying your own American Flag here is some information found on the identified website listed:

At the General Membership Meeting on Monday, April 13, 2009, the Members passed the proposal of purchasing 100 more Flags for our Flag Exchange Program.

The United States Flag Exchange Day on June 28, 2008 went fairly well considering our informational ad was run for only one day in the Sunday June 22, 2008 Plymouth Observer. It did not appear in the Canton Observer nor was it able to be shown on the community boards for Plymouth and Canton by Comcast Cable. I would like to thank those workers who helped today during the 6 hour event. Don Dignan, Jim Hodgson, Doug Fox, Gary Kubik, Ron King. Gary Boucher was there with Product sales and special customers Ron Dillingham, Jerry Thomason and Judy Thomason providing moral support.

The Flag Exchange was very successful. All of the flags are now gone. There is talk about doing this program again at a future date. Here is some information found on the identified website listed: Identified Website http://www.ushistory.org/BETSY/flagetiq.html

NOTE: Flags that are not made of cloth or felt are no longer allowed to be burned due to the material being identified as hazardous to individuals and the environment. Initially those flags were required to be buried but there is a recycle program available where 100% of the material can be recycled and used to produce new flags.

On October 18th The Veterans of Foreign Wars Post 6695 and Vietnam Veterans of America Chapter 528 along with Boy Scouts of America Troop 1535 had an American Flag retirement ceremony. This was the end product of a five month project for Alex Kucinski to become an Eagle Scout. The Veterans Groups purchased 220 American made 3'x5' flags to be exchanged for old flags that needed to be retired. The scouts assisted in the swapping of the flags and put on the program for the retirement complete with rifle salute and taps. We retired almost 500 flags. The audience (50) participated by each person adding a stripe or field to the fire. Alex Kucinski and Scout Master Ed Kucinski did a great job. The honor guard for the Post Colors are: Jay Drennen, Musashi, Daniel Wade, Kevin Sander, Ezera Chila of Troop1535 from the Hix Rd. Church of Jesus Christ of Latter Day Saints. The rest of the honor guard are Bob Lamouruex, Jerry Thomason, Joe Agius and Rick Ciaramitaro. We still have some flags left to exchange. Contact Gary Kubik at the Post or call 459-6700. Bring in your old 3'x5' flag and get a new one free. We are also still accepting "cell phones for soldiers". You can check out the web site VVA. Thanks to Gary "Bear" Kubik for the photos! The Ceremony took place at the V.F.W.'s Parking Lot on Saturday, October 18th. Thanks to Gary "Ouch" Boucher for building the container where people could drop off their old flags and exchange them for new flags.

Thanks Gary "Bear Kubik" for the photos!

The Meaning of the Flag Draped Coffin"

Meaning of Flag Draped Coffin All Americans should be given this lesson. Those who think that America is an arrogant nation should really reconsider that thought. Our founding fathers used GOD's word and teachings to establish our Great Nation and I think it's high time Americans get re-educated about this Nation's history.

Pass it along and be proud of the country we live in and even more proud of those who serve to protect our 'GOD GIVEN' rights and freedoms. I hope you take the time to read this. To understand what the flag draped coffin really means. Here is how to understand the flag that laid upon it and is surrendered to so many widows and widowers.

Do you know that at military funerals, the 21-gun salute stands for the sum of the numbers in the year 1776?

Have you ever noticed the honor guard pays meticulous attention to correctly folding the United States of America Flag 13 times? You probably thought it was to symbolize the original 13 colonies, but we learn something new every day! The 1st fold of the flag is a symbol of life.

The 2nd fold is a symbol of the belief in eternal life.

The 3rd fold is made in honor and remembrance of the veterans departing the ranks who gave a portion of their lives for the defense of the country to attain peace throughout the world.

The 4th fold represents the weaker nature, for as American citizens trusting in God, it is to Him we turn in times of peace as well as in time of war for His divine guidance.

The 5th fold is a tribute to the country, for in the words of Stephen Decatur, 'Our Country, in dealing with other countries, may she always be right; but it is still our country, right or wrong.'

The 6th fold is for where people's hearts lie. It is with their heart that they pledge allegiance to the flag of the United States of America , and the Republic for which it stands, one Nation under God, indivisible, with Liberty and Justice for all.

The 7th fold is a tribute to its Armed Forces, for it is through the Armed Forces that they protect their country and their flag against all her enemies, whether they be found within or without the boundaries of their republic.

The 8th fold is a tribute to the one who entered into the valley of the shadow of death, that we might see the light of day.

The 9th fold is a tribute to womanhood, and Mothers. For it has been through their faith, their love, loyalty and devotion that the character of the men and women who have made this country great has been molded.

The 10th fold is a tribute to the father, for he, too, has given his sons and daughters for the defense of their country since they were first born.

The 11th fold represents the lower portion of the seal of King David and King Solomon and glorifies in the Hebrews eyes, the God of Abraham, Isaac and Jacob.

The 12th fold represents an emblem of eternity and glorifies, in the Christians eyes, God the Father, the Son and Holy Spirit.

The 13th fold, or when the flag is completely folded, the stars are uppermost reminding them of their Nations motto, 'In God We Trust.'

After the flag is completely folded and tucked in, it takes on the appearance of a cocked hat, ever reminding us of the soldiers who served under General George Washington, and the Sailors and Marines who served under Captain John Paul Jones, who were followed by their comrades and shipmates in the Armed Forces of the United States, preserving for them the rights, privileges and freedoms they enjoy today. There are some traditions and ways of doing things that have deep meaning. In the future, you'll see flags folded and now you will know why. Share this with the children you love and all others who love what is referred to, the symbol of ' Liberty and Freedom.'